The Bohen Trail at Tioga State Forest in Blackwell, Pennsylvania near Morris, Pennsylvania is a moderate to strenuous 8.5-mile out-and-back trail that features two stunning waterfalls along the hike which are the main attractions - Jerry Run Falls, aka Jerry Falls and Bohen Run Falls, aka Bohen Falls. Bohen Run Falls is a beautiful 40-foot waterfall while Jerry Run Falls is about 20-feet tall. This trail also connects Blackwell to the West Rim Trail.

The hike begins at the southern trailhead for the Bohen Trail which is located on the western side of the Pine Creek bridge in Blackwell, PA. The trailhead can be easy to miss if you're driving by in a car, but easy to spot on foot.

The trail starts off by following some 20-foot tall cliff sides before heading up a fairly steep hillside. This hillside is extremely dangerous as its previously been washed away from rain and downed trees before, which causes trail closures. On this hike, we had to cross a sketchy, but newly-made bridge, that spanned a 10+ foot drop-off before the trail continued along a very narrow and steep trail.

Not too long after the sketchy narrow section of trail ends, approximately 0.4-miles after the trailhead, the trail will finally level out and gradually head toward Jerry Run Falls (aka Jerry Falls).

Upon reaching Jerry Run Falls, hikers will find a large rock that juts out above the ravine, which is great for taking pictures of the waterfall before moving on. The trail will then head across the top of Jerry Run Falls before continuing onward north toward Bohen Run Falls. Backpackers should note that just beyond Jerry Run Falls is a campsite as well.

At the junction with the blue blazed trail that heads down to Bohen Run Falls, hikers will take extra caution here as they make their way down the extremely dangerous ravine trail. Near the bottom of the hill, the blue blazes of this spur trail head south down Pine Creek; however, hikers will want to head north along Pine Creek to reach a beautiful campsite. At the campsites is another waterfall, about 10-feet tall, that spills down in the ravine before sending its waters flowing into Pine Creek. Take in this small waterfall before hiking (mostly a bushwhack) up Bohen Run to get to Bohen Run Falls.

The hike up Bohen Run is not the easiest. Hikers can stick to the left-hand side of the creek and follow very narrow paths to reach the base of the waterfall, but this hike is sketchy at best. Once at the base of Bohen Run Falls (aka Bohen Falls), take in the amazing 40-foot waterfall before heading back uphill.

Once back on the Bohen Trail from visiting Bohen Run Falls, hikers will find the hike up to the West Rim Trail and West Rim Road is mostly moderate to difficult, but is also entirely uphill. On the hike up the Bohen Trail, hikers can spot several other waterfalls that line Bohen Run. Unfortunately, because of the massive ravine and its steep hillside, most of these waterfalls must be admired from afar and most pictures from a distance cannot capture all of their beauty; however, we included some pictures of these waterfalls in the album provided. Most of the additional waterfalls are anywhere from 3-feet tall to about 10-feet tall.

When hikers reach the West Rim Trail, they will find a campsite at the trail junction. From here, the trail is easy to follow as it continues uphill, crossing Bohen Run, before making its way out along mostly-flat ground before reaching West Rim Road.

The hike back from the West Rim Road is identical to the hike in, but most of the hiking is downhill from here which makes it easier.

Difficulty
This trail is rated as strenuous since the entire hike of 8.5-mile out-and-back consists of over 2,400-feet of elevation gain. The 4.2-mile out-and-back hike to Bohen Run Falls is more of a moderate to difficult hike. Hikers should note that the difficult sections of the shorter waterfall trek are still difficult because of the steep hillside climbs involved.

Parking
Hikers will find parking at the coordinates provided at the Blackwell Access Area for the Pine Creek Trail. The parking lot is large enough to fit about 20 vehicles total, but it can get busy and packed early on weekends mostly because of bikers and kayakers.

Alternatively, hikers can also find parking near 41.585419, -77.416433 along West Rim Road, which is the northern terminus for the Bohen Trail; however, parking in this area is limited to one or two vehicles since there are very few parking turnouts here. Also note that hiking in this way is much more difficult and a longer hike than from the south if you only wish to see Bohen and Jerry Run Falls.

Camping and Backpacking
Backpackers will find plenty of beautiful campsites along this trail, but most of them lie along Bohen Run. The best campsites here can be found, technically off of the Bohen Trail and along the Bohen Run Falls spur trail. The campsites sit right next to Pine Creek and boast a beautiful 10-foot tall waterfall right next to the sites. All backpackers and campers must follow the Tioga State Forest dispersed/primitive/backcountry camping rules.

Blaze Colors
It's important to note that the Bohen Trail follows yellow blazes. Please note that the spur trail that leads down the ravine toward Bohen Run Falls (Bohen Falls) is blazed with blue blazes.

Dangers
Steep terrain: All hikers must know the cautions of this trail before heading out. First, the trail follows an extremely steep ravine in several sections - the first section of steep ravine hillsides is right along Pine Creek within the first 0.5-miles of the hike. This section of the trail often has washouts, landslides, or downed trees that completely destroy the trail. When we visited, in early May 2020, the trail had a newly made bridge that spanned a 10-foot (or more) sheer drop-off that was washed away earlier in the season.

The next area to be aware of is next to Jerry Run Falls (Jerry Falls) since this ravine is a sheer 20+ foot drop-off. And Finally, as hikers approach Bohen Run Falls (Bohen Falls), the ravine here is about 100-feet deep with nearly sheer drop-offs.

Hike at your own risk and do not attempt to reach Bohen Run Falls (Bohen Falls) if you do not feel comfortable. This hike is not for the faint of heart.

Rattlesnakes: While rare, the Timber Rattlesnake lives in this area and tends to come down to creeks to cool down or hunt between the end of April through the end of September. Watch your step and give any rattlesnake you see some space.

Water Levels and Creek Crossings
Hikers should note that when water levels are high, crossing Jerry Run and Bohen Run (only if you need to reach West Rim Road) can be challenging. We mapped this trail out in two separate hikes since the first hike was cut off by the strong currents of Jerry Run. Plan to get your feet wet and bring trekking poles to make parts of this hike easier. 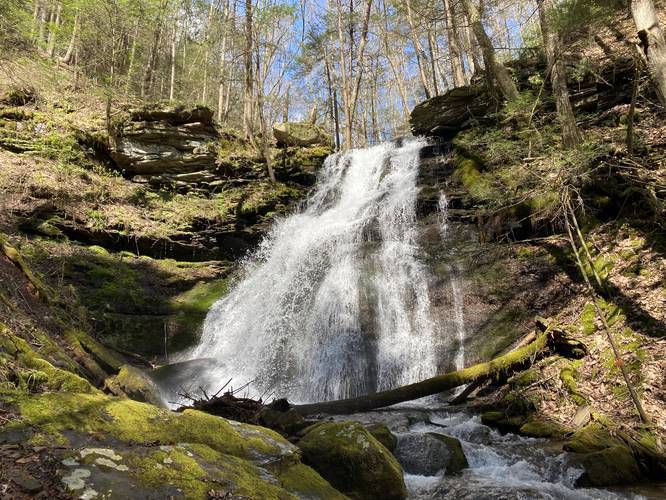 Hiked to Jerry Run Falls and back since Jerry Run was fairly deep due to recent rainfall.
Dogs Hiking 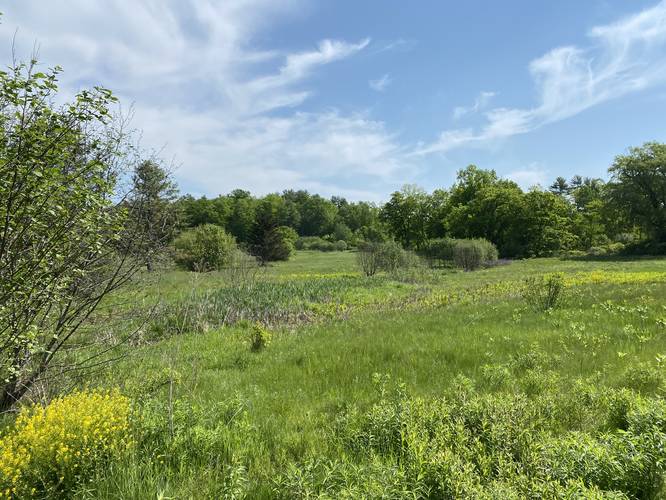 Highland Farm Preserve, ME
less than 500 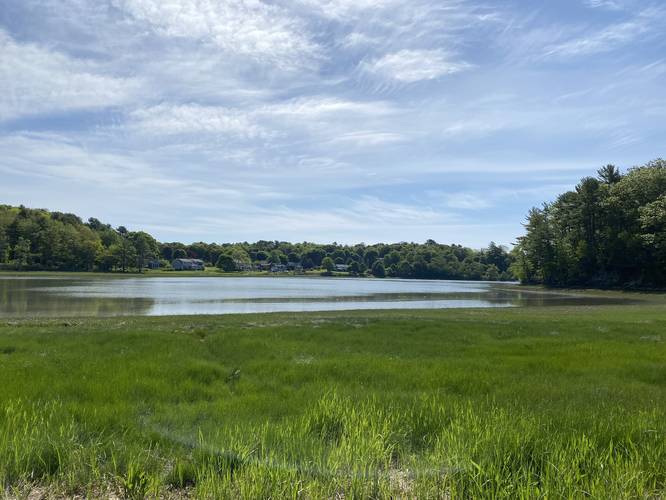 Steedman Woods, ME
less than 500 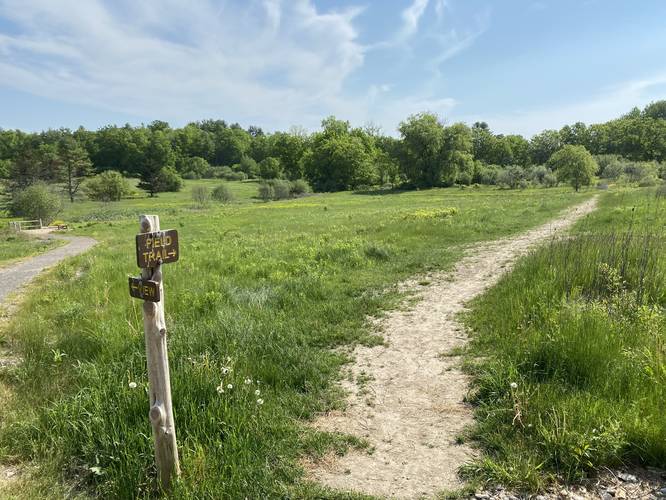 Highland Farm Preserve, ME
less than 500
1 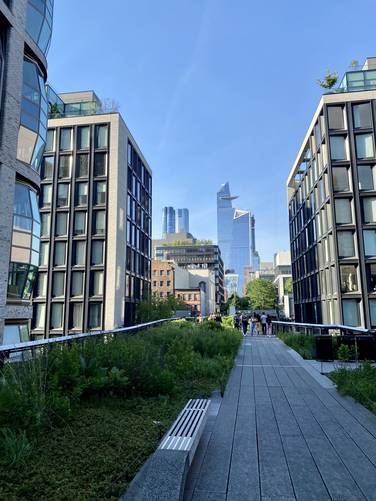 It takes a lot of time, money, and effort (including espresso shots) to run MyHikes, so we simply ask that if you find our content helpful or useful when planning your next adventure that you consider making a small donation to help keep the site running.

You can become a Supporter* (*MyHikes user account required) to unlock perks for as little as $0.83/month with a 1-time payment. Or you can simply Donate any amount without a MyHikes user account. Otherwise, telling your friends about MyHikes is the next-best thing to a donation and it's free!

Regardless, thanks for visiting MyHikes and have a great hike!
- Dave
MyHikes Founder / Admin