MyHikes is a community driven platform that aims to make trails easier to find for everyone. By using your smartphone, GPS tracking device, or online mapping tools, anyone can upload trails to the site. You can even add trails with no GPS data at all.

MyHikes was an idea that sparked after repeated Google searches for trail addresses that were often hidden behind user sign-ups and paywalls. Dave, MyHikes Founder, thought: There must be a better way to do this. The site was built in 2015 for friends-only until it was opened to the public in late 2016. The goal was to make getting to new and old trails easier by adding trails with approximate coordinates for directions and making them available on the web.

For more info or common questions, check out our FAQ page.

Contact us with questions, concerns, suggestions, or if you just want to drop us some knowledge.

MyHikes data comes directly from hikers and backpackers like you. The idea is to grow the site with a community of hikers who want to make finding trails easier.


No Trails Near Me!

You may find that the platform doesn't have any trails in your area, but this is just an opportunity to add trails you know of to make it easier for others. You don't need to get GPS data to add a trail, you simply just need to know some basic information about it.

If you find MyHikes useful and want to help support our cause, consider becoming a Supporter or making a small donation.

If your organization is interested in partnering with us, feel free to contact MyHikes Founder, Dave Miller.

Unfortunately MyHikes has no Sponsors right now, but some operating costs are supplemented by our awesome Supporters. If your organization is interested in helping us keeping our lights on while promoting your brand, please contact MyHikes Founder, Dave Miller.

MyHikes was founded as a private project by Dave Miller ( Admin ) in early 2015.


Shortly after MyHikes was first built, Dave moved from Boston to Pittsburgh, Pennsylvania where he lived for 4-years tracking and writing about trails from the area. Pittsburgh was where MyHikes was turned from a private project into a public platform and ultimately where it really started to take shape.


In mid-2019 he moved to the Wellsboro, Pennsylvania area (Grand Canyon of Pennsylvania) where he continues to build out trail data for the site.

Dave Miller, MyHikes Founder, grew up in a hilariously-named town in Massachusetts - Belchertown. He spent a lot of his childhood in the woods and would often camp out at Holland Glen - a favorite local spot.

In 2011 Dave moved to Boston, MA to pursue a degree in Computer Science. After graudating in 2014, he came up with the idea to build "Trailhead" - what would eventually be renamed to MyHikes. Serendipitously, Dave now works on Trailhead.com, which is owned by Salesforce (all opinions here are his own and not those of his employer).

Not long after moving to Pittsburgh, Dave adopted Jax - a crazy little dog that couldn't handle being left at home and was too reactive to handle seeing other dogs in public -- so to the woods they went!

Jax was and still is Dave's inspiration to continue building out more trail data for MyHikes. MyHikes has become an escape for Dave and Jax as they're able to find new places to explore, map them, and share them with others.

NH, New England, and Beyond

NH, New England, and Beyond

Thanks for visiting,
Dave & Jax* 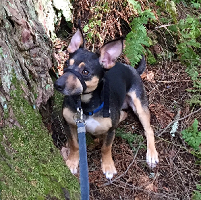