The Chimney Rock Vista Hike at Tioga State Forest in Cedar Run, Pennsylvania is a strenuous 5-mile out-and-back hike that leads to the top of Cedar Mountain and out to a stunning view point called Chimney Rock Vista. This hike also includes several other views along with a few waterfalls and is a great day hike in the Pennsylvania Grand Canyon.

Rattlesnakes: Between late April and early October, the Timber Rattlesnakes that call this area home may be out sunning themselves on the trail or near rock ledges. Watch your step and give them space.

Hike Description
This hike begins along PA Route 414 in Cedar Run and heads up the Bull Run Trail to start. This trail, despite the elevation grade shown in the chart, is much steeper than it looks. The trail immediately starts off steep, but has very few spots where the elevation grade levels out, if at all.

Bull Run Falls - Mile 0.14
Hikers will pass the largest waterfall along this hike - about 10-feet tall, around 0.14-miles into the hike. This waterfall has no name, but as the largest along Bull Run, it can be unofficially named Bull Run Falls. Just behind it, no more than 500-feet up the trail, lies another waterfall in Bull Run which spills down the mountain at about 7-feet tall total spanning across two separate tiers, Middle Bull Run Falls. Not far up the trail from the second waterfall is a third waterfall that spills down slanted rocks, but is no taller than 4-feet at best, Little Bull Run Falls. These waterfalls certainly help take the mind off of the grueling climb up the Bull Run Trail. All of the waterfalls can be enjoyed within the first 0.3-miles of the hike.

Bull Run Trail, Rocks
Around mile 0.6, with about 1/3 of the Bull Run Trail left to hike, the trail's substrate changes to large rocks which makes this uphill climb even more difficult. The elevation grade also increases along these rocks, until it levels out approximately 0.2-miles from the top of Cedar Mountain.

Chimney Rock Trail
Once hikers reach the top of Cedar Mountain, take a left-hand turn to head to the Chimney Rock Trail. Here, the trail begins to follow a pine forest with blueberry underbrush that leads along the edge of the mountain. Here, hikers will find several view points along the way located around mile 1.5 and 1.8. Hikers may also venture off-trail near mile 1.8 (heading east), to find another view point, but this requires a bushwhack.

Hike down to Chimney Rock Vista
After passing several vistas along the Chimney Rock Trail, hikers will start to head back down the mountain along a ridge. This hike becomes steeper and steeper the further down you go. Once you reach a large rock ledge, it appears as though the hike abruptly ends; however, if you look downhill and to the left, hikers will notice the rock ledge of Chimney Rock Vista below. The last section of the trail is by far the most dangerous as the mountain's elevation grade is extremely steep. Be cautious as you make your way down to the vista point.

Chimney Rock Vista - Mile 2.5
Once at Chimney Rock Vista, hikers will notice why it has this name - the rock ledge is surrounded by 50-foot drop-offs on each side - making this rock ledge stick out of the mountain side like a chimney. The view from Chimney Rock Vista is stunning as it includes several mountain peaks within and surrounding the Grand Canyon of Pennsylvania. Hikers can sit and enjoy the view, but fair warning, it's not the most fun vista if you're afraid of heights because of the massive drop-offs and extremely steep mountain grade that surround this view point.

Hiking Out
The hike out is the opposite to the hike in with the exception that the uphill climb from Chimney Rock Vista is even more difficult than any of the terrain hiking up the Bull Run Trail. Hikers will need to take their time to ensure a safe climb up and out of the vista. The hike back down the Bull Run Trail can also be tricky in several places, especially in the larger rock zones where the elevation grade is much steeper.

Camping and Backpacking
Backpackers will find no campsites along this trail; however, there may be some spots to setup a campsite along the flatter sections of Cedar Mountain. Please follow all state forest dispersed / primitive / backcountry camping rules.

History - Bull Run Fire
Hikers may notice charred trees and other signs of forest fires along this hike. The low-growth mountain laurel, blueberry bushes, and young forests are all the result of the 2008 wildfire named the Bull Run Fire. Copied from the Tioga State Forest PDF: "In April 2008 a fire called the Bull Run Fire started on Rt. 414 south of Blackwell and raced up Bull Run Hollow. It burned for a week, traveling 2.5 miles, devastating almost 4000 forested acres. Approximately 150 fire fighters battled the blaze. Air tankers helped the fire fighters contain the massive fire that had flames at times as high as 35 feet. After the fire, large scale logging efforts took place to salvage usable wood products. Today a new forest is growing rapidly, but you can still see the charred remains of what was once there. Use caution and be aware of dead trees!" 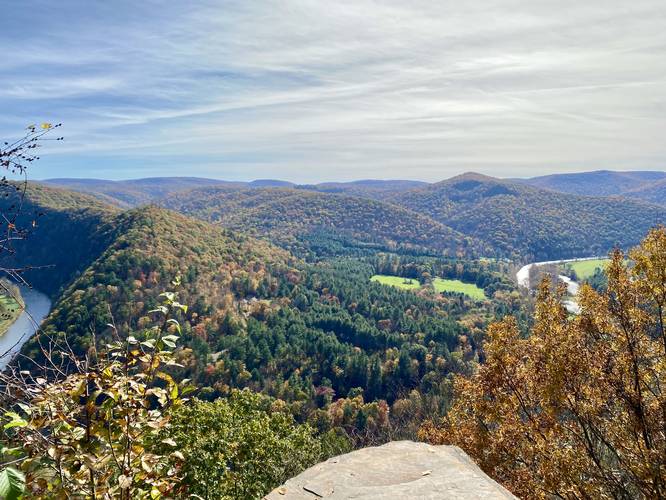 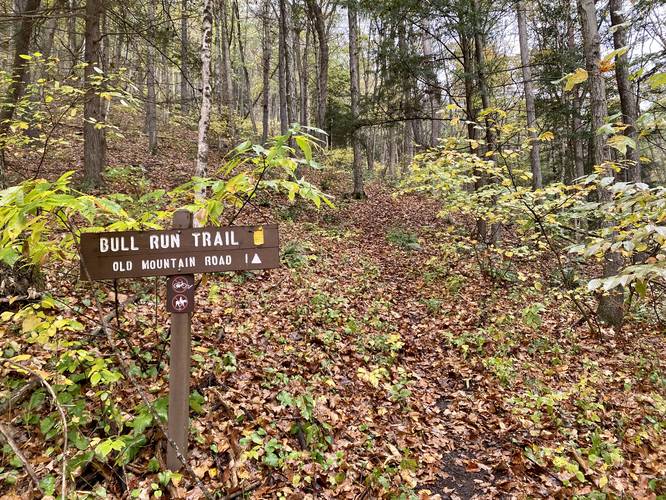 Brought a group of friends on this hike to try and reach Chimney Rock Vista, except I didn't expect the vista to lie 1/2 way down the other mountain's ridge. Following information from the book: Short Hikes in Pennsylvania's Grand Canyon (2011) by Chuck Dillon, lead me to want to explore an off-trail rock vista named Chimney Rock Vista; however, it appears as though there are likely 2 different rock ledge vistas by the same name. This lead my group to get confused. We ended up stopping the hike atop Cedar Mountain before the trail heads down the mountain ridge (85% of the way to the vista). We then made lunch on the mountain's spine of a rock just off of the trail before heading down. Snapped some nice photos of the foliage, fog, and waterfalls along the way, but came back to actually find the vista later that week.
Trail Map
Hiking 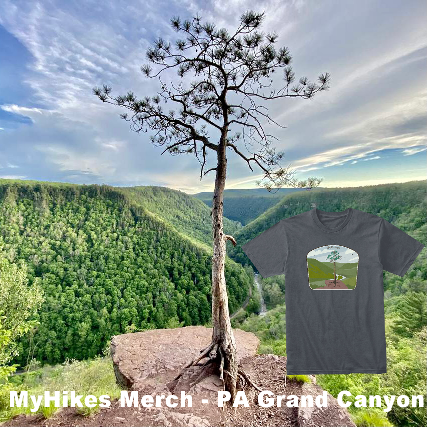 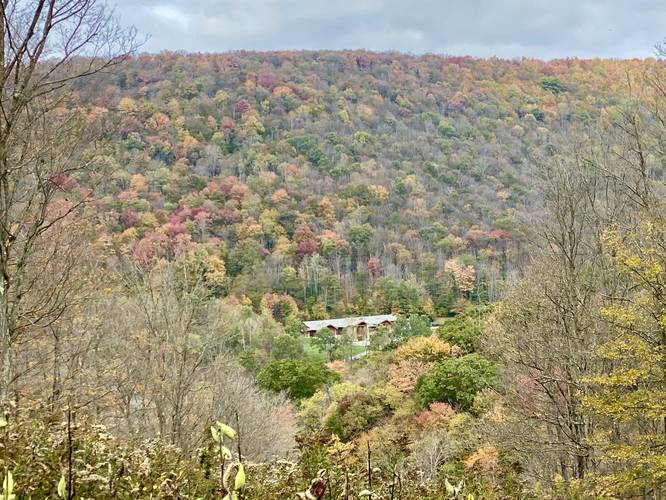 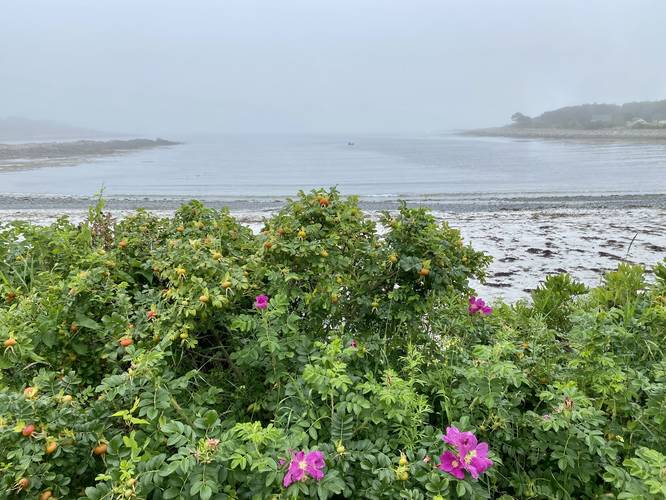 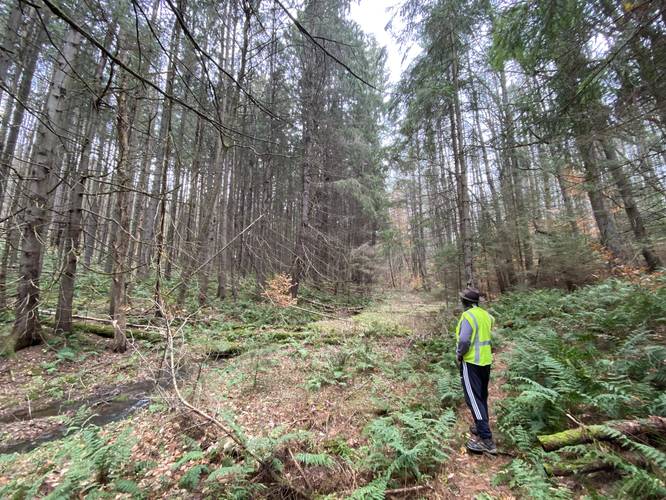 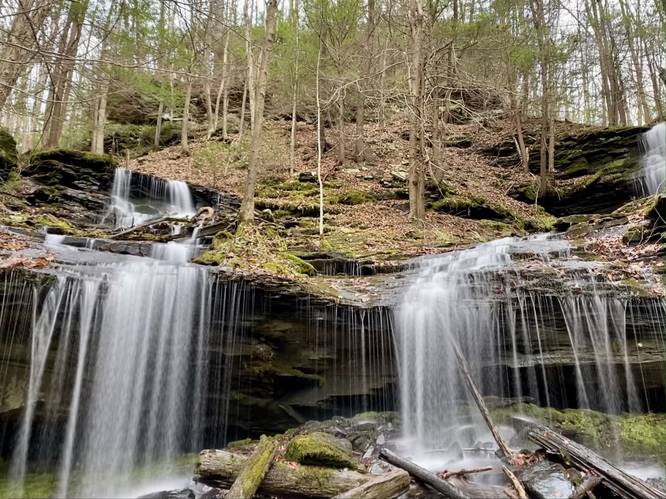