This trail follows a section of the Sinnemahoning Valley Railroad grade dating back to 1885. In that year, the Sinnemahoning Valley Railroad began running from Keating Summit (known as Forest House) on the Buffalo and Susquehanna Railroad (later part of the Pennsylvania Railroad) east to a switchback and then south down the west branch of Freeman Run to the Goodyear's sawmill in Austin, PA. All that remains here today is the old railroad grade along the west branch of the Freeman Run which lies within Susquehannock State Forest. Some of the north parts of this trail is on private land, but almost all of this trail is on state forest land.

In Austin, Frank Goodyear built a huge Hemlock sawmill, and hauled cut timber logs to Austin by rail to get sawed into lumber and then used his rail line to transport the sawn lumber to the large cities. In 1886, he extended the line 13 miles south to Costello, where there was a large sole leather tannery. The leather tanneries used the Hemlock bark, which was a by-product of the saw mills, for making tannic acid. This allowed Goodyear to benefit greatly by supplying one industry with the waste product from his lumber operation. Hemlock Tannins made the leather more resistant to decomposition and gave the leather a distinctive, deep reddish-brown color.

By 1893, the Sinnemahoning Valley Railroad merged with the Buffalo and Susquehanna Railroad and by then extended sixty-two miles from Keating Summit on to Wharton and beyond. From Wharton, the rail line proceeded north east up a steep grade to Galeton. About 14 miles south of Galeton, four large switchbacks were required to get over the ridge and into Galeton. From Galeton the rail line ran eastward to Ansonia, with a 13-mile branch to the at that time booming logging town of Cross Fork. By 1901, the Buffalo and Susquehanna Railroad had built another extension from the Wharton mainline, south through Sinnemahoning to connect the Philadelphia & Erie Railroad near Driftwood.

Austin became Goodyear's center of operations in the Sinnemahoning Valley, and was known as Hemlock City. Disaster struck when Austin was literally wiped off the map by a large flood caused by the failure of the Bayless Papermill Company concrete dam on September 30, 1911.The lumber profitability had already declined before then due to the total cutting of the Eastern Hemlock stands that completely cleared the hills of thier the old-growth forests. To make matters even worse, a board range of bad economic conditions continued to affect the rail lines and the once-prosperous industries operating in the Sinnemahoning Valley from then on. Even the state-of-art papermaking pursuits by George Bayless started in 1901 failed to revive the area's economy and prosperity due to the 1911 burst of the large concrete dam built in 1909 to provide adequate water to run the mill processes at full capacity during the seasonally dry periods of low flow in the Freeman Run headwaters. The rail line from Keating Summit to Austin was abandoned by 1941. By 1942, the rail lines south of Austin, running through Costello and Wharton, and all the way to Sinnemahoning, were also abandoned. And, that mostly ended of the railroad era in these parts, except for the tiny village of Keating Summit which has the only active Pennsylvania Railroad line still running in Potter County yet today.

The Goodyear Hemlock Sawmill closed in 1911, and the Bayless Papermill Company survived the breaking of the Austin Dam in 1911 as well as another smaller earthen dam break in the flood of 1942. However, a major fire in 1944 caused the Austin papermill to close forever. Only Ruins are left in this washed out valley on a 2-mile stretch along the east branch of Freeman devastated by the Dam breaks. The two Freeman Run branches that converge in Austin, from whence it flows as a single waterway to its mouth at Costello.

Trails
This hike follows a forest trail maintained on an old railroad grade. This tracks along where Goodyear's Sinnemahoning Valley Railroad once ran. The trail is accessed by crossing over the west branch of Freeman Run on a small foot bridge that is maintained by the Southern Potter Snowmobile Club. The Sinnemahoning Valley Railroad trail may be open to snowmobiles and other motor vehicles. Hikers should use care, particularly on curves where oncoming traffic is not visible. Also, please remember to Respect Landowners and Stay on Marked Trails!

The distance (one-way) on this initial hike covered 3.55 miles with a change in elevation at 434 feet, which equates to a 1.3% gradient (1.3 to 100). The continuous grade makes for easy walking on this trail. However, the distance of the entiire trail may be difficult for some hikers. The hiker may opt to turn around sooner in the hike in order to shorten the distance. For the early Railways pulling a heavy load of logs or lumber, the rules were different. In order to move the locomotive and freight cars up-the-hill and to brake them on the down-the-hill, the slopes of these railroad grades were designed to be within certain ruling gradient limits. One such rule says that the maximum wieght that a locomotive can haul, including the weight of the locomotive itself, on a 1% gradient (1 to 100) is about one-half of the load that the same locomotive can pull on level track. However, this old railway thumb rule can be used to expalin how much more work the backpacker needs to use on these hilly trails.

A point of interest in this hike is the earthen embankment made to avoid a change in grade over a tributary creek on the route, located at about ¾-mile north from the trailhead. This earthwork spans at least 400-foot-long above the creek below. The structure appears to be about 30 feet at it's tallest point. This early earthwork has not only withstood the rigors of the 66 years of railroad use but has continued to endure since its building nearly a century-and-a-half ago. And, it appears in rather good condition today. One might say that this old earthwork rail-bridge as faired far better than some comparable concrete and earthen dam structures known in these parts.

Parking
Hikers can find parking at the coordinates provided; next to the trailhead, along PA Route 607 at the intersection of Gas Well Road. Another option is to park at Austin Dam Memorial Park and hike to Sinnemahoning Valley Railroad Trail using Gas well Road as a connector route to the Jacob Run and Stuckey Hollow Loop Trail. The Gas Well Road was constructed during the Great Depression by the Civilian Conservation Corps.

Private Land
This trail crosses some private land at the northern part of the trail. Please respect the land owners and stay on the trail at all times. 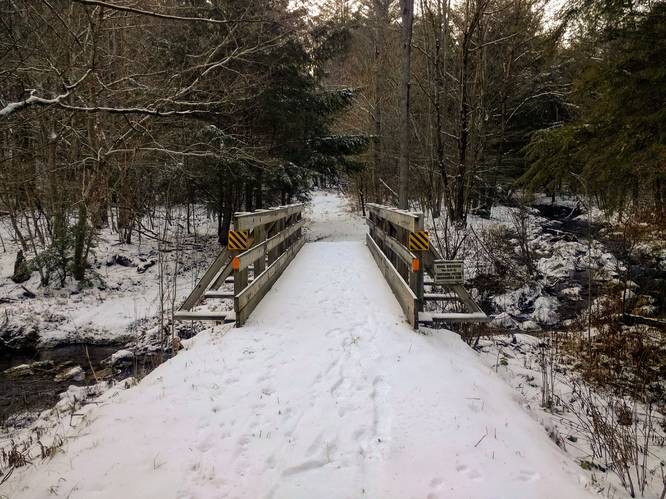 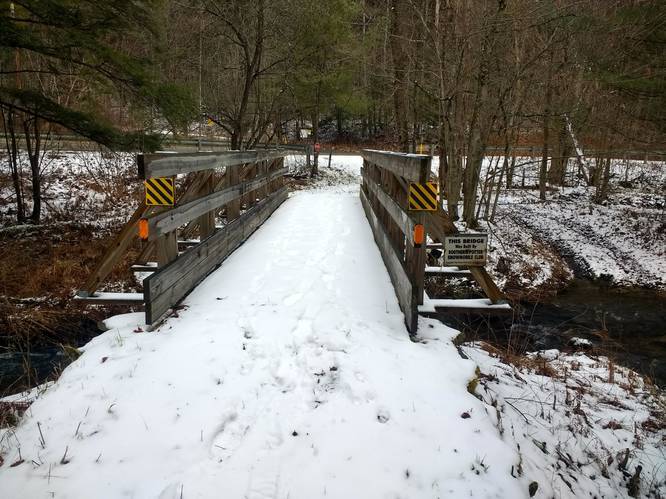 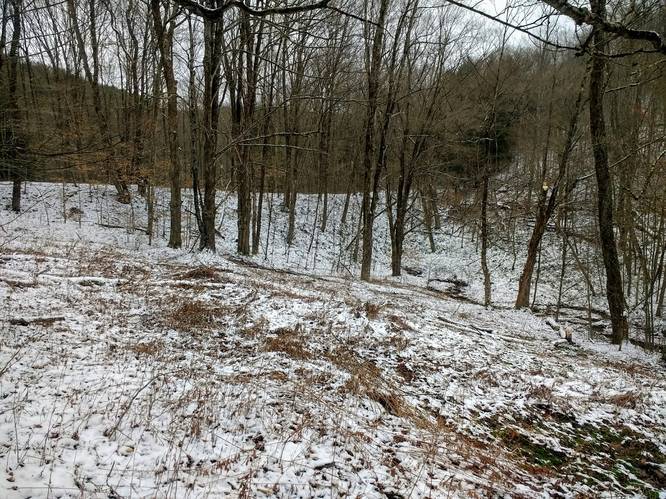 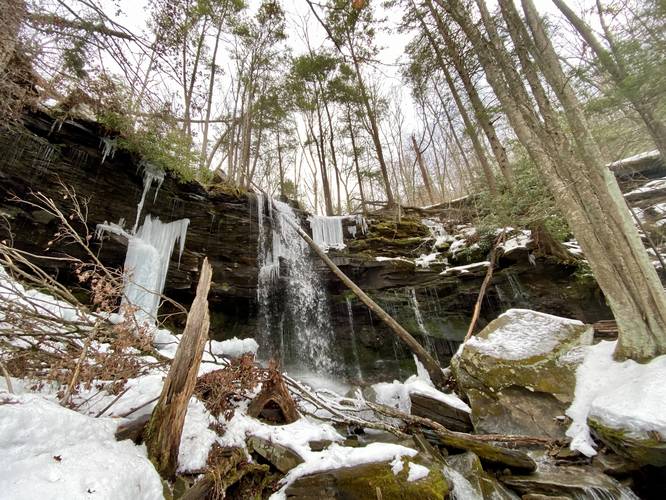 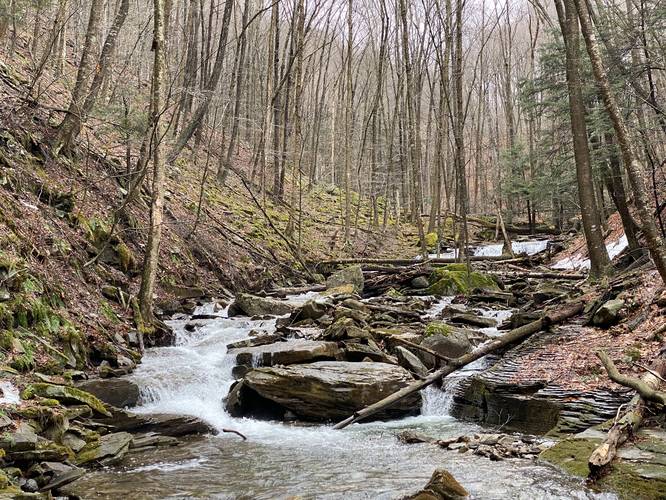 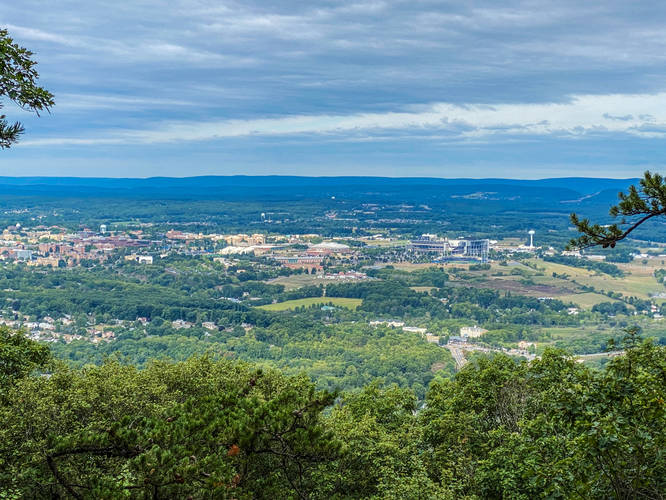 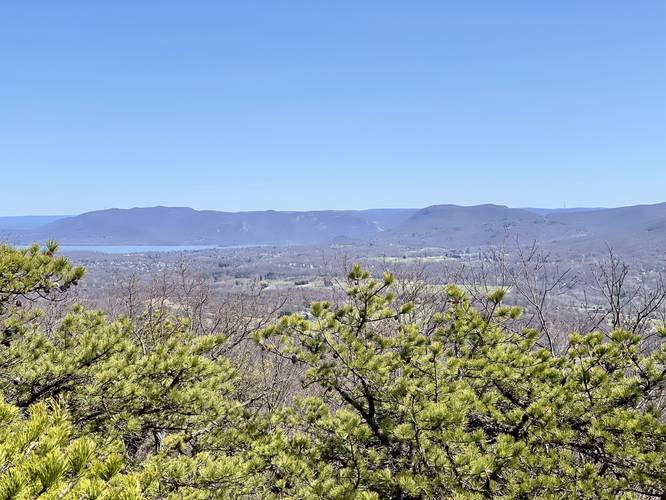