The Jacob Run and Stuckey Hollow Loop Trail at Austin Dam Memorial Park in Austin, Pennsylvania is a moderate 7.2-mile loop trail that features a beautiful creek along with a mountain ascent. There are several eye-catching mountain top views, most notably at the head of Donovan Hollow clearing looking south at 1.3 mile into the walk, and continues on forested trail that transverses across a hogback ridge from the Donavan Hollow outlook to the trailhead at the top of Jones Run Road. The hardwood forest is grand along the way, however some clear cutting has been done to large sections of the forest in this area that detracts from the over-all unspoiled nature of these state lands. The hike is laid out so as to avoid the clear-cut sections, which have a thick regrowth of brush and briars and are nearly impossible to walk through. A favorite of this walk in the Jacob Run Trail which follows a small creek down a remote hollow beginning in a large white pine stand at 5 miles into the hike and then continues for more than a mile through an impressive stand of old-growth hardwoods leading to the bottom of Jacob Run hollow.

This loop trail begins and ends next to the Austin Dam Memorial Park; however, most of the trails themselves lie within Susquehannock State Forest. Some of the trail sections are on private land, but almost all are on state forest land.

The hike begins by ascending approximately 500-feet up to a mountain ridge that runs above Stuckey Hollow, Donovan Hollow, and Donovan Hollow Run to the south. To the north, the ridge trail runs adjacent to Jones Run Road - another driveable trail except for the state forest sections which have been gated and are closed to public vechicles. This unnamed logging road trail heads westward and over to Gas Well Road. The mileage between the trailhead and Gas Well Road is about 3.45-miles and while most of the hike is along a mostly-flat ridge, the initial climb to reach the top of the ridge may be difficult for some hikers.

After reaching Gas Well Road, the trail takes a right-hand turn and follows the road for about 0.55-miles until it reaches the Jacob Run acess Trail. Hikers should take a right-hand turn along the Jacob Run Trail, where the hike begins its descent back to parking. Just before the trail reaches Freeman Run, at the bottom of the mountain, hikers will reach a junction where taking a right-hand turn will head south and cross Jones Run Road back to parking. From here, hikers will walk along the road until they reach the parking lot for a 7.2-mile loop hike.

A point of interest along this trail is a small stone building sitting on the hillside a few hundred feet above the Jacob Run access trail near the trailhead with Gas Well Road. This building is located along the top of Jacob Hollow Trail a few hundred yards from its intersection with the Gas Well Road at 4.1 miles into the walk. It is believed that this structure, based on research done by Civilian Conservation Corps (CCC) Historian John Eastlake, was the dynamite storage building for CCC Camp #S-145 at Bark Shanty, Austin. In the early CCC program, the camps did not have bulldozers or other heavy equipment, so they used dynamite to break up stumps and rocks into pieces small enough to move out of the way with muscle power and hand tools. Dynamite storage facilities were always located at a safe distance from the CCC camps. The Bark Shanty Camp was located near the intersection of Gas Well Road and Bark Shanty Road, and only the concrete foundation ruins of the Bark Shanty CCC camp remind today.

S-145, Bark Shanty, PA was established in July of 1935. The camp closed near the end of 1941. Work projects completed by the company include the Gas Well Road, leading from the lower boundaries of the camp site westward to the hard-surface highway 607 connecting Austin and Keating Summit, and Jones Run, a road leading from the upper part of the camp site eastward to highway 872; and Bark Shanty (formally known as Trout Run), a connection between Pennsylvania highways 872 and 607 was also serviced by this camp. The stone bridge across the Jones Run used to access the Austin Dam Memorial Park from PA Route 872 was also built by the Civilian Conservation Corps Bark Shanty Camp.

Trails
This track follows a mix of forest trails, logging roads, and state forest roads. First, the hike follows an unnamed trail that runs from the parking area and up to a ridge above Stuckey Hollow. After following the mountain ridge, the trail connects with Gas Well Road and follows Gas Well Road for 0.55-miles before taking a right-hand turn onto Jacob Run Trail. As noted above, sections of this trail on the Gas Well and Jones Run roads were constructed during the Great Depression by the Civilian Conservation Corps.

Parking
Hikers can find parking at the coordinates provided; however, some GPS devices and apps will bring you to a location close to the coordinates, but along PA Route 872 instead. The easiest way to find the exact parking location is to drive to the Austin Dam Memorial Park and drive to the entrance road - Jones Run Road, drive over the bridge, and take a left-hand turn to head toward Austin Dam. Drive down this road until you reach the trailhead and parking coordinates.

Private Land
This trail crosses some private land to connect back to the state forest. Please respect the land owners and stay on the trail at all times. 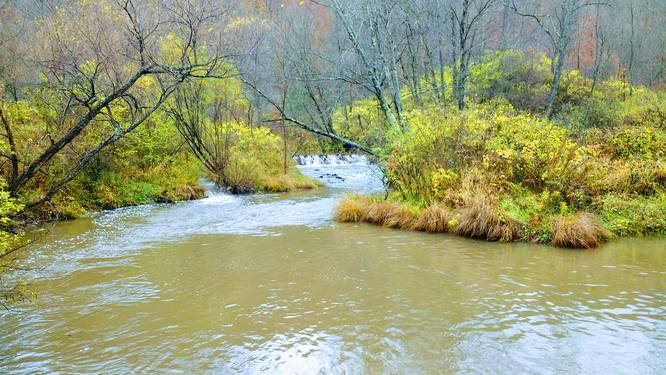 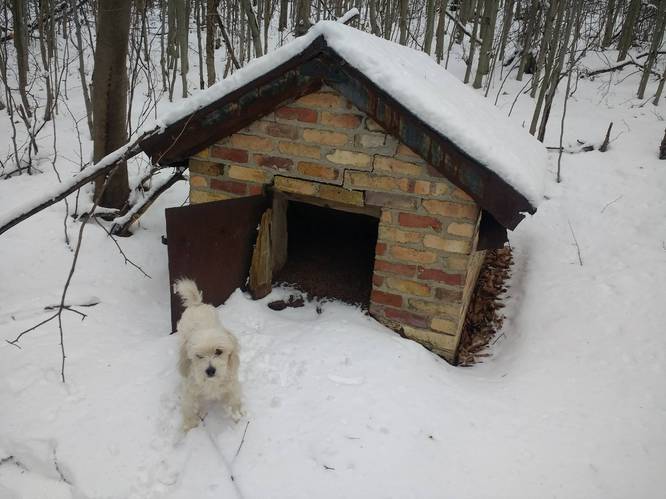 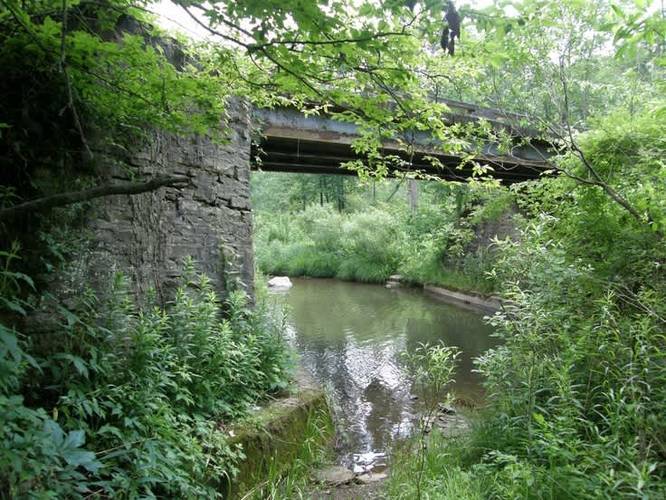 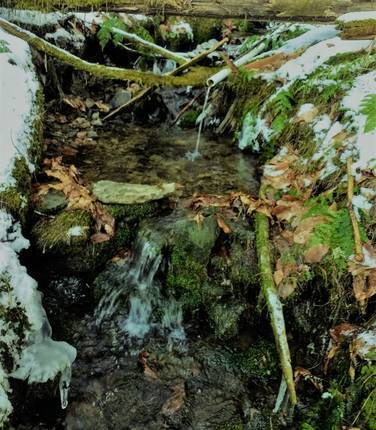 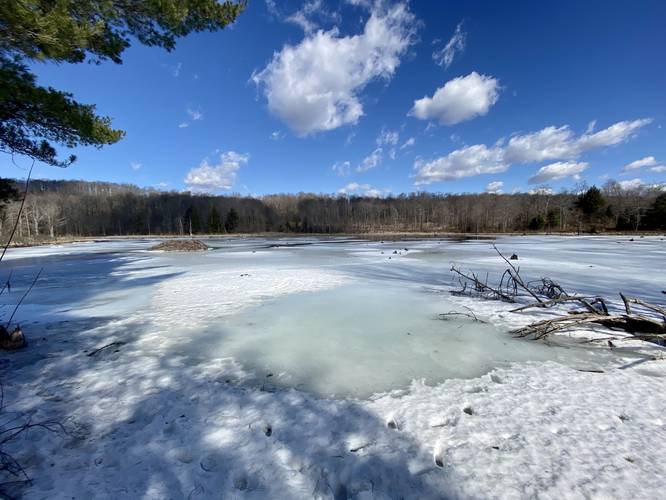 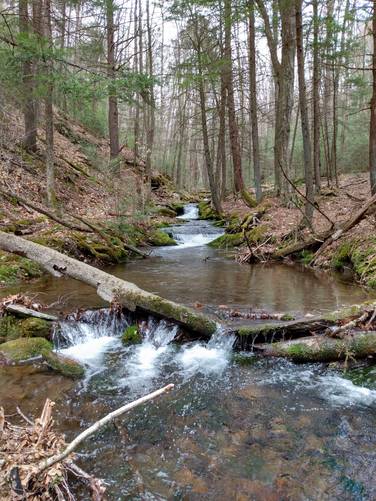 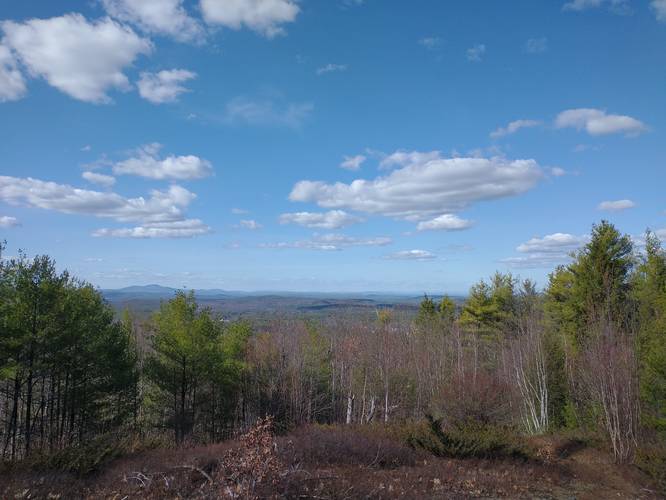 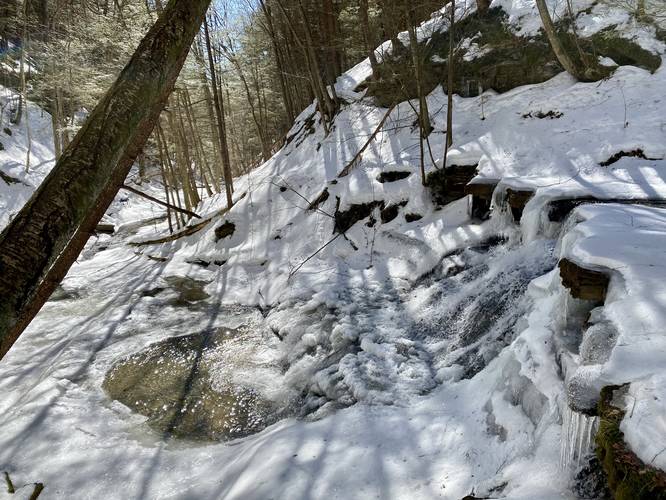